As a member of the Apache Trail Attractions Committee, Superstition Mountain Museum shares in the concern with reopening Apache Trail (SR-88) from Apache Junction all the way to Roosevelt Lake. Below is a re-post from the Save Apache Trail website. It gives a brief history of the issues that have closed this historic road.

A Short Recap of the Apache Trail Issue

The Apache Trail has been closed for the past two and a half years because of a rockfall on the most scenic section of the Apache Trail. Fish Creek Hill is known for its white-knuckle descent and scenic overlook where the road straddles the cliffside to the bottom of Fish Creek. The rockfall was caused by the remains of tropical storm Lorana that dumped over six inches of rain in a day. The storm came days after fire crews extinguished the Woodbury Wildfire, prompting concerns over soil stabilization and continued flooding. The Arizona Department of Transportation then closed the road indefinitely without a real explanation.

The Wildfire ripped through the Superstition Wilderness and was devastating to many recreation users. However, the fire never burned Fish Creek Hill or the streams that flow over the cliff. The chared landscape quickly recovered, sprouting green life just days after fire crews extinguished the fire. ADOT nor the Forest Service have seeded the area or attempted to rejuvenate the soil. 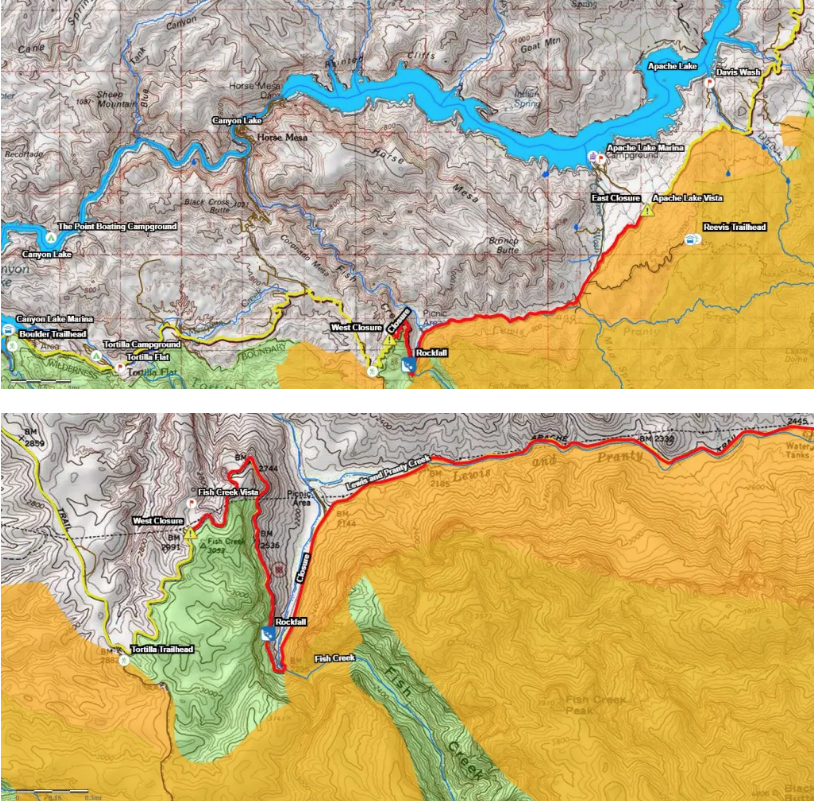 This map shows the burn scar in orange; Green depicts the Superstition Wilderness. The Red line represents the closed section of the Apache Trail. You can view an interactive map HERE.

Days after fire crews extinguished the blaze, the Tonto National Forest Burn Area Emergency Response Team determined it would take three to five years before the soil would recover. Therefore, ADOT decided to put the Apache Trail on the back burner claiming that the road is a low-volume Road and thus not worth fixing.

Several years prior to the Woodbury Fire, planning for an improvement project by Central Federal Lands in cooperation with Tonto National Forest, ADOT, and local business owners began on the East Side of the Apache Trail. This project applies to a 14-mile section between Apache Lake Marina and Roosevelt Dam. This improvement is supposed to start this year and includes increasing the line of sight around corners, paving the road, and upgrading bridges and culverts. However, this improvement project does not include Fish Creek Hill, where giant boulders block the road.

For the past several years, the Arizona Department of Transportation has been trying to discard the Apache Trail. Whatever the reason, they don’t want it in the State Route System. However, the road was quitclaimed to Arizona in the 1950s by an act of the US Congress. There is a deed in the Maricopa County Recorders office.

Because the Apache Trail is a Revised Statute 2477 road, it is a fundamental right of passage that ADOT can not close without following strict procedures. Similarly, forfeiture of the road would likely require an act of Congress. Fortunately for us, Arizona law limits ADOT’s authority while making these decisions.

In 2017, the Arizona Department of Transportation conducted a Low Volume State Route Study that included the Apache Trail. The study also included 21 other state highways considered insignificant to ADOT. Those roads include Arizona’s most scenic highways like The Desert to Tall Pines, Coronado Trail, Swift Trail, and others. In this study, ADOT suggests these roads are low volume and gives several options for future maintenance of each state highway. Among the suggestions is the forfeiture of each road to other jurisdictions.

The Arizona legislature approved $700,000 to start the studies necessary to fix the Apache Trail, but ADOT has done nothing. The law approved funding for ADOT and compelled them to act. It appears ADOT thought the Wildfire would speak for itself, and it did. We gave ADOT the benefit of the doubt, and after two years, we believe it’s time to engage.

Arizona Backcountry Explorers has revived interest in this issue and has provided context to ADOT’s actions. We have given the public a way to directly contact the Arizona Highway Commission, Arizona Department of Transportation, and the Arizona Governor with a realistic request. These actions have resulted in County Supervisors hosting monthly meetings with the inclusion of several state and county political leaders, the US Forest Service, historical societies, business owners, state agencies, and members of the public working in tandem towards a shared goal. We have been on point the entire time.

The Arizona Department of Transportation hasn’t done anything but defend its narrative, and members of the Arizona Legislature are not thrilled with their actions (or lack thereof). All signs point to the need for the public to take action to prevent ADOT from permanently closing the Apache Trail. Since the day the rocks fell, business owners and Apache Trail users have been pressuring ADOT to open the road with very little success. There is currently a Change.org petition with over 30,000 signatures, but ADOT still won’t budge.

Since we have engaged, ADOT has received thousands of correspondences with concerned individuals and has vowed to keep us updated via social media and email. They have produced multiple pieces of content to explain what’s happening. However, much of what they are saying is not entirely true.

Senator Kelly Townsend is introducing a bill very soon to further compel ADOT to act. We are hopeful that this new law will protect the Apache Trail for generations to come. Additionally, we hope to force ADOT to withdraw the 2017 Low Volume State Route Study from further policy decisions. We believe that ADOT should never put our historical highways on the back burner simply because they are low volume. We also hope to create maintenance standards for dirt roads within the State Highway System.

It’s because of you voicing your concern in our email petition that has brought this issue to the frontlines. Every time a person signs our petition, an email is sent to the entire Highway Commission, the Senior Division Administrator of ADOT, and Governor Doug Ducey. For the past three months, we have flooded their inboxes with over 1,700 emails from individuals as far away as Spain.

Your ticket for the: Fix Apache Trail